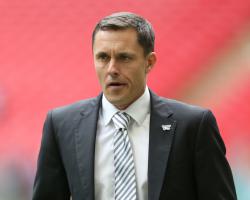 Having marked his home debut with the winner against Bradford a week earlier, it was a similar story as Ladapo's 68th-minute header from a corner proved enough for a 1-0 victory over Oldham.

"In the end, I thought we certainly edged the game and didn't really look in too much trouble overall," said Hurst, who has seen his side concede just once in eight league and cup home games since being appointed in October.

"We didn't give up too many chances

We had to defend a lot of crosses from deep, especially towards the end.

I just don't want anyone to start taking things for granted.

"We need those fans behind us all the time and hopefully we can keep delivering for them."

As for the contribution of Ladapo, Hurst is delighted with how the striker, who spent the first half of the season on loan at Oldham, has settled.

He said: "I'm pleased for him because I think in some quarters he took a lot of stick at Oldham and for me, certainly in terms of work rate, he'll always get my support.

He can finish, he's got decent quality at times, I think better than maybe some people have give him credit for.

Lots more performances to put in between now and the end of the season, but he's settled in extremely well and the goals can only help."

The defeat leaves Oldham second-bottom and six points adrift of safety, although they do have two games in hand on many of the teams above them.

The Latics' best opportunity fell the way of Billy McKay, who fired just wide from close range when the game was goalless.

Manager John Sheridan said: "It was a disappointing performance

I don't think there was a lot between the teams.

"It was a very scrappy game

Obviously two teams near the bottom of the table, lots of endeavour.

Instead of just running around and getting 15 miles in for the game, try and use your head a little bit more.

"I'm more bothered about us and I've seen why obviously the team haven't been scoring goals because we didn't hold the ball up, we didn't keep the ball well enough and we didn't try and disturb them

It was too easy, everything was straight forward."

Sheridan, who recently returned to take charge after a spell as Notts County manager, added: "I couldn't see us losing the game to be fair

It's a very soft goal, people going for the same ball and the lad's reacted quicker than any of our players.

"Billy McKay's probably had the best chance in the game to put us 1-0 up and if we score there it's a totally different game, but we didn't play well."