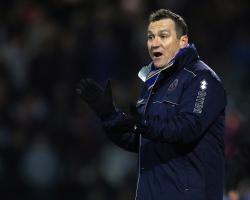 Mellon's side put their league struggles firmly to one side to stage a dramatic fightback, having trailed 2-1 with just three minutes remaining.

"I just think it was a terrific day for the football club," said Mellon

"To have this club involved in games like this and challenging big clubs like Sheffield Wednesday to get into the fifth round of the FA Cup is what it always should be and we're very, very respectful of that

"We try and make sure we give the fans these days, these afternoons and we're delighted to have been able to have done that."

Mellon was delighted for match-winner Grimmer, who turned 22 earlier in the week.

He said: "People are asking for attacking football so I can't do any more than my right-back getting on the end of a cross in the 97th minute

"As soon as I saw Vernon going up that left-hand side, he's such a technically good footballer, I actually was commentating.

"I knew he would get a cross in the box and I just thought 'somebody get on the end of that' and bang, I was delighted, and the whole place just explodes, so it's fantastic."

Wednesday led twice thanks to a double strike from midfielder Lewis McGugan, but Akpa Akpro equalised in between for a Shrewsbury side who just never gave up.

Wednesday boss Carlos Carvalhal felt his side should have been awarded a stoppage-time penalty when Atdhe Nuhiu went down in the box and Shrewsbury swiftly broke down the other end to seal victory through Grimmer.

"It was a crucial moment in the last minute," said Carvalhal.

"You know that I'm a long time at the club and I never talk about referees, never talk about excuses, but of course when the score was 2-2 there was a moment that was a very clear penalty to Nuhiu and it can decide the game.

"I don't believe that anybody on the pitch saw something different than a big penalty, but the referee and assistants didn't see what everybody saw

Okay, you don't give a penalty and after a counter-attack Shrewsbury go 3-2.

"I must give congratulations to Shrewsbury, going to the next round."