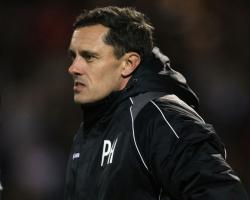 Shrewsbury, who have been without a manager since Micky Mellon left on October 7 to take over at National League side Tranmere, approached Grimsby over the weekend for permission to speak to Hurst and the Mariners confirmed his departure to the New Meadow on Monday morning.

Chris Doig has also left Grimsby and he will be Hurst's assistant at Shrewsbury, who are currently bottom of League One and six points adrift of safety.

Meanwhile, Dave Moore has been installed as caretaker manager while Grimsby look for a successor to Hurst.

A statement on Grimsby's official website said: "Following an official approach by Shrewsbury Town over the weekend and the agreement as to compensation which would be payable, Grimsby Town gave permission for Shrewsbury to speak to Paul Hurst with regard to the vacant manager's position at Shrewsbury.

"Agreement has been reached between Shrewsbury and Paul Hurst who has been appointed manager.

He leaves the club in a strong position and we wish him well for the future.

"Assistant manager Chris Doig will be joining Paul at Shrewsbury and again we thank Chris for his work for the club.

In the interim Dave Moore has agreed to act as caretaker manager and we are grateful to Dave for once again stepping into this role."