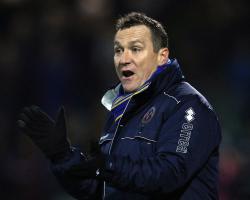 Last season, Cambridge expected to net around ÃÂ£1.5million from their televised fourth-round replay at Old Trafford, which they lost 3-0.

Mellon is not thinking about any return tie against United yet as he eyes an upset in Shropshire but insisted lower league sides need the cash boost a replay brings.

"We could lose clubs

I don't know many clubs at this level making money," he said.

To get that extra money in will only help us improve our football club.

"That (taking away replays) would kill us

That's the dream for anybody at this level

To go and play and prove you can function at those levels.

I want this to be what it is, it's a massive day for us.

"We're not over-awed by it

We're really determined we'll go and enjoy it and get heavily involved in it.

"If you take away that chance of playing at those big stadiums English football loses a massive thing."

The possibility of midweek FA Cup fixtures has also been claimed, while in January FA chief executive Martin Glenn refused to rule out change but insisted they must ensure lower league clubs do not end up out of pocket while also sticking to the competition's principles

Any future decision must be right for all parties and no motion is on the table, with nothing imminent, while the FA remain determined to protect the integrity of the competition