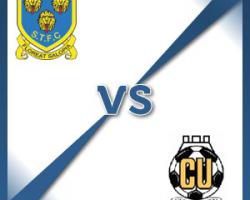 Shrewsbury V Cambridge Utd - view commentary, squad, and statistics of the game live.Shrewsbury without LawrenceShrewsbury will be without Liam Lawrence once more against Cambridge after he missed the last two games

Andy Mangan (knee) remains sidelined but is edging towards a return after an operation last month.James Wesolowski (knee), Nat Knight-Percival (knee) are out for the rest of the season.Cambridge could have Luke Chadwick back in the squad at Greenhous Meadow.The experienced midfielder has missed the last five matches with an ankle problem but may make the bench at the weekend

However, none of the U's other injured players will be ready in time for the trip.Tom Elliott, Rory Gaffney (ankle), Jordan Chiedozie and Matteo Lanzoni remain unavailable, although Chiedozie played in a training game on Wednesday and appears closer to making a comeback than the others.Elliott has not featured since the 2-0 defeat at Plymouth on February 14, when he came off injured during the first half, but Cambridge manager Richard Money insists he does not know what exactly is wrong with the forward