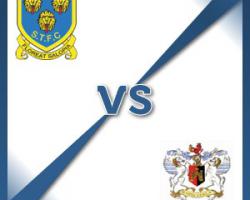 Shrewsbury V Exeter - view commentary, squad, and statistics of the game live.Shrews duo bannedConnor Goldson and Ryan Woods are both banned for Shrewsbury after being booked for the 10th time this season

The pair were booked in Monday's 1-0 win at Mansfield and will serve two-game suspensions, starting with the visit of Exeter

James Wesolowski and Nathaniel Knight-Percival are sidelined with long-term knee injuries and will not return until next season.Exeter will assess Jamie McAllister ahead of the trip.The left-back limped out of their 2-0 win over Newport on Monday with a muscle injury and boss Paul Tisdale says they will monitor the problem with Craig Woodman standing by to deputise if McAllister is not given the green light.Despite David Wheeler stepping off the bench to score and then win a penalty the winger looks likely to continue his super-sub role at Shrewsbury and start on the bench as the Grecians look to make it nine matches unbeaten.David Noble and Pat Baldwin miss out once more while striker Tom Nichols serves the final match of his three-game ban for a red card against Morecambe