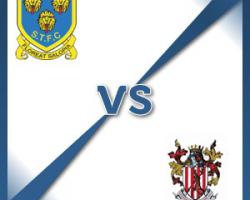 Shrewsbury V Stevenage - view commentary, squad, and statistics of the game live.Southern set for Shrews bowKeith Southern could make his Shrewsbury debut against Stevenage after signing on loan from Fleetwood

James Wesolowski is out for the season after suffering a serious knee injury in the 3-0 win over Hartlepool last weekend.Nathaniel Knight-Percival is back after suspension and is likely to replace Jermaine Grandison in defence

Town are third in Sky Bet League Two and are unbeaten at Greenhous Meadow in the league this season.Stevenage boss Graham Westley will almost have a full squad to choose from.Just Jon Ashton and Harry Worley remain unavailable due to injury, while Westley has this week seen his options boosted by the return of David McAllister.The former Shrewsbury midfielder is back at Stevenage on a permanent basis after enjoying a successful loan spell with the club this season and he will be available to play against his former club.Boro head into the game on a six-match unbeaten run in League Two, winning five of them