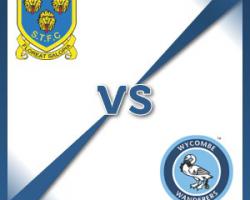 Shrewsbury V Wycombe - view commentary, squad, and statistics of the game live.Shrews in good shapeMicky Mellon looks to have a near full-strength squad available to him as Shrewsbury look to cement their spot at the top of the League Two table.A 2-0 win over Oxford on Boxing Day moved Mellon's men top, displacing their opponents Wycombe at the summit after a run of just one defeat in their previous 10 games.The Shrews will be able to call upon Jermaine Grandison after he returned to the squad for the first time in nearly a month following illness.James Wesolowski could return to the side after two games out, but Callum Burton will definitely be unavailable, after departing on-loan to Conference side Telford.Fellow high-fliers Wycombe will look to end 2014 at the top of League Two when they visit the current leaders

Shrewsbury are ahead of the Chairboys on goal difference and Gareth Ainsworth, who signed a new contract with the club on Boxing Day, will be hoping to stop his side going three games without a win

Wanderers will be confident visiting Shropshire, going to a ground where they have never lost.Stuart Lewis, Matt Bloomfield and Steven Craig are pushing for starts, while Joe Jacobson hopes to play against the club which informed him of his release by phone, when he departed in the summer