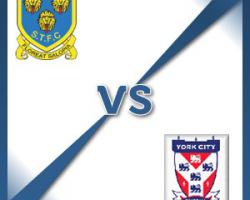 Shrewsbury V York - view commentary, squad, and statistics of the game live.Double boost for ShrewsRyan Woods and Connor Goldson could return for Shrewsbury after serving their two-game bans

The duo missed Saturday's win over Exeter and Tuesday's 1-0 defeat to Bury as Town missed out on the chance to clinch promotion.Victory over York though - and defeats for Bury and Southend - would see Micky Mellon's side return to Sky Bet League One

James Wesolowski and Nathaniel Knight-Percival are out with long-term knee injuries.York have no new injury or suspension concerns after securing their Football League safety with a six-game unbeaten run.Russ Wilcox's side guaranteed survival with Tuesday night's home win against Morecambe and the manager is expected to select his starting XI from an unchanged squad.Striker Emile Sinclair remains doubtful after missing the last five games due to a thigh injury and Wilcox must choose again between Jake Hyde, Shaun Miller and Shaq Coulthirst.Defender Dave Winfield sits out the second game of his four-match ban following his recent dismissal against Hartlepool